You are cordially invited to join me at the third Women Inspiring Women Annual Awards ceremony, which is happening on Saturday 5th July.  There are lots of great reasons to be there and as a result I’m getting soooo excited…

First of all I know I will creating some amazing memories. At the second award ceremony last year I had the absolute honour of being chosen by my sister Directors to be presented with the Damsels in Success Director of the Year award.  As so much goes on behind the scenes before the big day, I honestly hadn’t even thought about the possibility winning it until 10 minutes before it was announced, so as my last minute preparation, I put on an extra layer of lipstick and vamped my speech when I got up on stage!!!

As well as the gorgeous, glittering prizes there are so many other brilliant things to look forward to, too.  For a start there’s the build-up: Everyone gets the opportunity to nominate special women in one of the 10 categories.  It is fabulous to know that so many amazing women out there will now be recognised for being inspiring and making a difference.

As a member of the Damsels family we directors can’t be nominated ourselves and in fact assist in the short-listing process… What a fabulous but tough task this has proved to be for ALL the Damsels directors!  I’m only glad I don’t have the final decision to make – that is now down to a public vote, now that the short listed candidates have been announced.

Next come the all important preparations – there is a posh frock to be chosen, nails to be painted, hair to be done – all the accoutrements of a gorgeous and glamorous night out.  And it’s not just a night for ladies, gentlemen are very welcome to come along too – and the dress code for them is ‘black tie’ (hence they earn the nickname of our ‘James Bonds’).

Our last two ‘does’ were fabulous nights out in so many different ways – I loved the glamour of them, of getting together with old friends, making new ones and then of course there were the Awards themselves…

The Damsels in Success Directors get to announce the nominees and present the prize in each category.  So there is the delicious ‘drum roll’ anticipation of it all, and then the “ahs” and applause as the award is announced and one surprised and delighted woman steps onto the stage to claim her prize.

For the last two years I was wearing particularly high shoes – 6 inch glamour wedges as it happens, and so I was determined not to let any alcohol touch my lips until I had clambered onto the stage, said my piece and handed over the prize – to the winner of the ‘Author / Blogger’ category.  I’ve been so careful to ensure that my stand out memory is NOT me drunkenly falling off the stage!  Being 6 inches taller than usual was a mini challenge in itself, but I love those shoes and they may just be re-appearing this year too…

The lady who won the Award in 2012 was Lisa Cherry – author of a number inspirational books, including her latest one ‘Steering the Mother Ship’ about the complexities of the mother / child relationship.

Lisa came up to me later and thanked me personally for the award – in return I gave her the card and gold envelope which announced her as winner.  In 2013 the winner was Hannah Davis – author of inspirational teen fiction book ‘Voices of Angels’.

Both women are amazing writers whose published work has made an inspiring difference to the world, I’d never heard of them before the Awards and now I am proud to say that I have made meaningful connections with them and follow both of their paths with warm and genuine interest.

And my fellow authoresses aren’t the only contacts I have made at the Awards – there have been Facebook friends met in the flesh for the first time, the new people I get to chat to and make meaningful connections with and it has all been so pleasurably effortless.

So looking forward to the next ceremony, I know that the enjoyment factor is going to be 10 / 10…  I get to be with Lucie (Bradbury, Damsels CEO) and my sister directors; I get to host tables with my own Damsels members, guests and friends, and there will be so many other people from the UK wide Damsels community and way beyond that I get to spend quality time with.

When other people in your circle win, it is a gorgeous and infectious feeling too… One of my own Burton members – Hayley Lloyd Wilkins, won not one, but two prizes – for ‘The One to Watch’ and most ‘Inspiring Damsel in Success Member’ in 2012– so to say I was proud would be a severe understatement!!

Add to all this a great 3 course meal, champagne, laughter and dancing, as well as the prize giving and the absolutely inspired choice of MC’s.  In the past we have had Richard Wilkins and James Lavers both of who managed to both inspire us and make us laugh!  For 2014 our MC is the gorgeous Abi Griffiths, TV Sports presenter and voice for ‘A Positive Image‘, an organisation which promotes women in sport, she is also an Ambassador for the charity Sense and their sports programmes for DeafBlind people.

And THIS year, we have the added bonus of a FREE ‘Business with Ease’ seminar being held on the same day.  Buy your evening ticket and you will also learn Lucie Bradbury’s 7 LAWs for Life, business and beyond, presented by Michelle Clarke (Cardiff Director), Dan Bradbury (Lucie’s husband and the number 1 marketing guru of the coaching world), and myself, along with some of my other sister Damsel in Success Directors… Bargain!

Then we get to party, and when the night is over, it’s not all over… As someone who has been nominated for and won awards in the past, I know how exciting / humbling it is to find out that someone else values you and what you do. Not only that – it is also a good PR call.  After my award I did the rounds of newspapers and radio stations, which meant I could shout from the roof tops about Damsels in Success and my book Peachey Letters too! 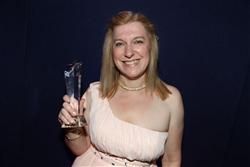 Happy times… and it’s all happening again on the 5th of July at the Macdonald Burlington Hotel in Birmingham.  I’ll be giving out another award, enjoying the ambience and partying away on my 6 inch heels all over again – hurrah!  Anyone can come along, so I would love you to join us and if you would like to know more – please check out all the details here…

Right then, better get those 6″ heels out and start practising my super model sashay and dance moves… 😉

With sparkle and laughter

Author, Coach and Winner of a Winner Inspiring Women Award 2013